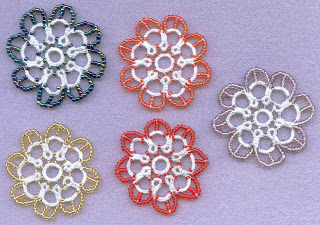 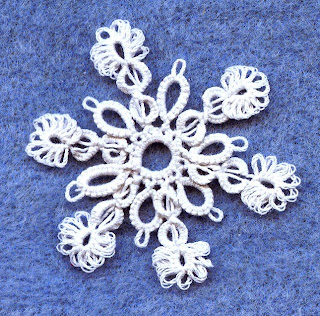 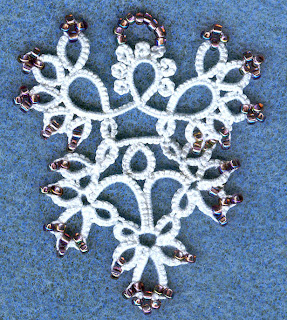 Saturday morning started with doing the OctoStarFlake, a pattern by Jane Eborall, taught by Donna Thompson. This class taught the technique of the long beaded picot. I already knew this technique, but loved the pattern. When I got home I had a BUNCH of white wound shuttles. (with a theme of Tatting in a Winter Wonderland, what would you expect?) I made a bunch of these, emptying the shuttles, and put them on my small tree that stays up all year with little tatted bits on it.

My next class was Mrs. Mee's Snowflake. This was a snowflake that was adapted from an old-old pattern by Marth Ess. We learned the difference between single stitches and pearl stitches in old patterns. This pattern also used half-closed Josephine rings (I had a lot of trouble closing mine the same amount each time. This was a challenging pattern for me and I really enjoyed it... the effect of the pearl stitches gives the picots an overlapping look that I really like!

My last class at Palmettos was a Snow Angel by Sharren Morgan. She shared with us a technique for making a flat join for a self closing mock ring. This method keeps the ring from coming open as you continue to tat. After two days of doing a whole lot of tatting, I had a couple of bandaids on my fingers from thread cuts. My poor little angel has a dark shadow in its middle from dirty gunk from the loose sticky side of the bandaids. I thought this would wash out, but it didn't.... and really doesn't show unless I point it out, like I just did... 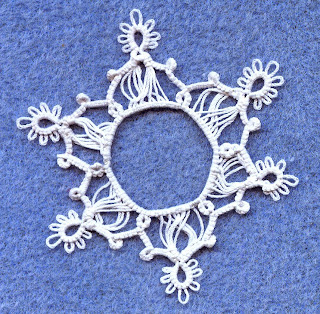 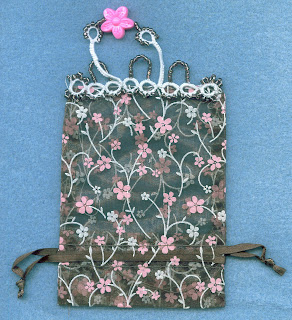 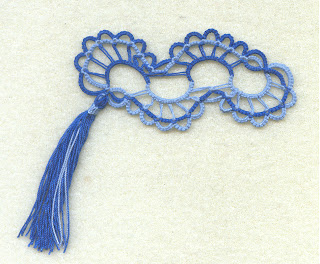 No posts in a long, long time! Starting in June, I worked on a doily that is now residing in my UFO drawer (temporarily or permanently to be decided upon later.) In September, I started on the tatted/beaded ornaments for the relatives for Christmas. Then on September 23rd and 24th, I received a great gift. I got to attend the Palmetto Tatters Guild, "Tatting in a Winter Wonderland Tat Days! Thank you to all who have contributed in one way or another to help build their scholarship fund, I was one of this year's grateful recipients. Upon returning from Palmettos, I had a few days until the Oklahoma Lacemakers Guild's Lace Embrace Day. That was on Saturday, on Sunday I felt yucky enough that I skipped church and on Monday woke up with pneumonia. I am still recovering from that but feel well enough to play on the computer some, so I thought I would at least show you some of the things I did.

The last picture is Martha Ess's Sunrise, Sunset Bookmark. The techique taught in this class was the use of picot gauges to get equal sized picots. One of the things that I thought was most astonishing, and economical was that Martha cuts her picot gauges out of a plastic folder....she says that the folder lasts for a very long time, and when she needs a different size, she can just cut one easily. I only made two repetitions of the design because I really wanted to finish as much of the projects as I could there at the conference. The bookmark didn't look like much until I pinned it and blocked it, now I am quite pleased with it.

The next class I had was Tatting with Flair with Georgia Seitz. If you have not met Georgia yet, you are really missing something. She is a very gracious, encouraging lady. This class taught the encapsulation of threads. She tried teaching us a new way to hold our thread and shuttle when encapsulating threads--tried because this dog couldn't seem to learn a new trick. We decorated our tulle bags with rings and chains (some encapsulating three threads), beads and buttons. It was amazing to see her classroom, their were a lot of items to be used in some of her other classes, but they certainly opened your eyes as to how tatting could be used in different ways, and different objects that you could decorate with tatting.

My last class on Friday was the Broomstick Picot Snowflake with Martha Ess. I love this pattern, and hopefully next time I try to work it, I'll have more patience arranging my picots than I did on this poor example that I'm showing you now in the first picture. It was amazing the way the picots swirled on Martha's pieces looking like stuff I've seen out of other lace techniques--something I may look forward to with some practice.


Check back here to see my Saturday stuff from Palmettos!
Posted by tatlyn at 5:00:00 PM 1 comment: