Wow!  I had a dr. look at me today and tell me I haven't looked this good in several years!

I am now on 4 liters of oxygen 24/7.  Enlarged lymph nodes in my lung and a hiatel henia are pressing on my airway. COPD + CHF = the worst of the bad news.  The great news is I have had some GI bleeders cauterized (6 unit of blood since November of  '20), both knees have been replaced (the right in November '20 and the left in April of '21 and I've had a port inserted (blood draws are difficult, IV starts are almost impossible) and I am getting infusions of gamaglobulin to help my ailing immune system    I am a walking symptom and have had 17 covid tests (if they are testing for brain cells -- I lost those a long time ago!) and 2 antibody tests--all negative!!  I have stayed as isolated as possible (but my husband is a public school teacher and is in and out of the house multiple times daily) and I have had both my immunizations. Now that I am mobile--it is time to quit being "one with my recliner" and get healthier!!  (The only thing good about over 100 days in the hospital in less than four years is the change of scenery!)

Some friends have decided they are going to get married--after being together for at least ten years... They don't want a bunch of fuss--are not even inviting family...they just have reached a time in their lives where they want to make things "legal."  My husband is to do the non-ceremony... 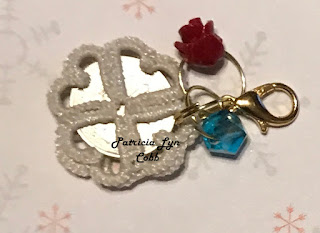 Well, I wanted her to have something "bride-like" and remembered something I had seen from a company "Better Than Buttons".  They make a long safety pin  with dips in it which holds four charms for a bride.

I decided to throw something similar together.  I put these all on a lobster claw hook so it can be hooked onto her bra, or onto a necklace or buttonhole.....   There is a silver dime (another wedding tradition) for something OLD, my tatted dime holder for something NEW, a nice blue bead for something BLUE, and a red rose bead that was my mother's for something BORROWED (I will GIVE her this after the wedding in case she wishes to pass it on some day). 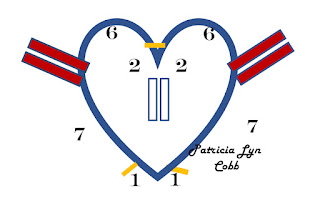 Empty blue picot is a temporary picot made with the core thread to aid in closing the ring.  I usually stick a safely pin on these to hold them open until I intentionally close the ring.  I use the method that Jane Eborall has so fantastically taught/described and illustrated here