Seven days in the hospital this time.  Changes at home... There is a very expensive new machine to go with my oxygen machine that makes my bipap machine no longer necessary--this "Trilogy" machine is really helping me breath better! .  Dear friends in Child Evangelism Fellowship gifted me her late mother’s hospital bed—what a wonderful blessing!  I can now do what was impossible before (sleep with my head above my stomach and my feet above my heart).  My energy level is next to zero…I’ve had days when a shower is the only thing marked off my “to do” list.  I am going to have to give my body time to recover.

The following was also written for our guild’s newsletter this last month.  I am hoping to continue my Finger Lakes memories in the next post. 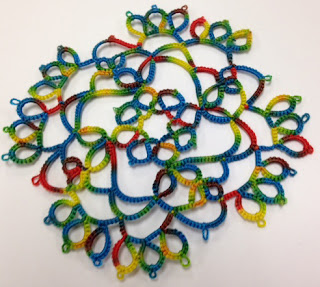 This is done in the Penny20 Multi
Variegated Thread.  It is the “Swirl Bookmark”  The pattern can be found on the blog,“Tat’s All She Wrote!” on the Saturday, November 2, 2013 page.

A while back, Joan T.  and Emma M. introduced me to “penny 20 thread”.  It is a polyester thread—not my usual choice for a tatting thread.  BUT Edda (the lady who sells these threads in Italy) has tempted me and tempted me with her absolutely brilliant colors.  I have only been able to “windowshop” (with my nose pressed firmly against the glass!) because of the extremely high cost of shipping and handling on these threads.  Recently Tatting Corner became the exclusive distributor of these threads in the United States.  They are selling 400-450 ft of thread on bobbins  for $4.00.  You can see these vibrant colors here http://www.tattingcorner.com/threads-12/penny-20-77/?referrer=CNWR_30711492117529

I bought a beautiful, eye-catching thread, Penny 20 - 0M01 - Multi Variegated.  Here are my thoughts about this “new” (to me) thread—I have never done any extensive tatting with anything other than cotton.

😀It does not show "wear" when you repeatedly have to take out a ring.
It does not stretch (this made my split chains look a little better)
My motif felt nice and “stiff” without being blocked
😒Because the thread does not stretch, you cannot "fake" a picot easily.
I tat tightly, and I had trouble closing my rings.  I made it a habit to use “Thread Heaven” on my thread. 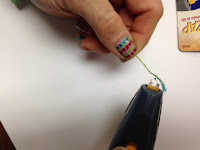 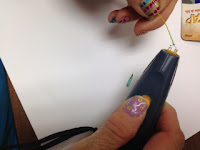 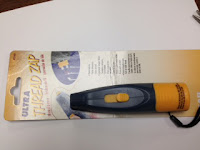 I was told to use a drop of acetone (nail polish remover) to seal the ends and prevent fraying—this did not work for me.  Lisa Adams at Tatting Corner suggested a drop of nail polish or super glue worked into the ends.  My own solution was to “buy a new jewelry making tool.” at Hobby Lobby.  This fantastic item is called an Ultra Thread Zap.  It runs on two AA batteries, heats up in seconds and quickly does away with fraying and seals the thread without a large blob/knot on the end of the thread. 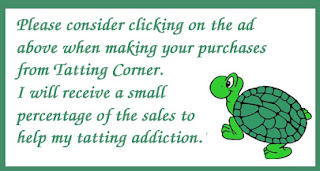 One Day, or Day One?  This is DAY ONE of fighting to get my health back!

Part 1 1/2?? My Finger Lakes narrative/retrospective will have to be sidelined awhile.  I've been hospitalized (yes--again) for the last six days.  It will be a day or ??? until my parole.  This is an article that I wrote for our guild newsletter.

I have a confession to make that will make many tatters gasp.  “I have always hated Clover shuttles!
When I started tatting, I had the choice of metal Boye shuttles, and the light, colorful Clover shuttle.  I chose the convenience of being able to carry extra thread with me easily AND the wonderful fact that I didn’t have to empty a shuttle to start a new project.  Over time I became “addicted” to a shuttle with a hook.  The ability to buy bobbins cheaply, instead of emptying the shuttle started me on a “bobbin collection” of metal Boye bobbins, and then later when Aerlits came on the market, a plastic bobbin collection.

Boye shuttles became “harder to enjoy” as I tired of the oxidation marks that the metal left on my lovely tatting, and the downturn in quality over time meant the metal often cut my thread.

A few years ago, I thought I had finally found the shuttle that would rule my tatting kingdom—the moonlit shuttle.  I loved the feel, the amount of thread it held, and the hook.  These shuttles were even easily decorated—I soon had half-a-dozen pairs of Moonlit shuttles decorated with my beloved turtles.

On our way home from Finger Lakes.  Cynthia, my traveling companion, had an internet order she wanted to pick up, so we stopped at Lisa Adams’ house.  Lisa is the new owner of Tatting Corner.


There I saw—a clover shuttle with a removable bobbin! I gave in, and bought two shuttles, and two packages of th­­­e removable bobbins.  Then I thought Cynthia said the case for them was $5.00—I wasn’t going to pass that up, it is a great case!

Well, I have finished my first project with the “awful, I hate Clover shuttles” and these are my feelings---

😀  The bobbins come with a holder to aid in winding the bobbin.

😀 Each package comes with a clear plastic washer which will allow you to wind the bobbin on your sewing machine.

😀  The bobbin have a round hole in the middle—it has a 6-sided, hexagon shape on the bobbin that “clicks” softly onto the same shape inside the shuttle.  This allows thread to be pulled off the bobbin when it is needed but provides a nice gentle tension on the thread when it is in use.  I love this feature!

😒😏This shuttle comes with the usual clover “pick”—I have never figured out how anyone uses that pick to make joins.  However-- I found my- self using the pick to help take out an awful knot/mistake.  That was the “Eureka” moment, when I thought to myself…”these aren’t really bad shuttles….you know, I kind of like them!” and …..They are coming very close to removing the Moonlit shuttle’s crown!


I like them enough, I think I will purchase a few more, next chance I get.