I want to leave a legacy how will they remember me?
Did i choose to love? did i point to you enough
To make a mark on things? i want to leave an offering
A child of mercy and grace who blessed your name
Unapologetically and leave that kind of legacy

I want to live my life, not only to leave a legacy as a Christian witness...but to leave a trail of tatting behind me.  I'd like to be remembered by the tatting made for and given to people.  I'd like to have tatting students who will be better than their teacher and go on and share tatting with the next generation.  This whole little "rant" came into my heart because I received an unexpected package (contents below) in the mail from an acquaintance who sent me a friend's mother's tatting stash upon her friend's mother's death..."no one else will ever use it, and I know you will."  I thought, what if, upon my death, there was NO ONE to send my tatting stash to?  What if tatting was then "truly a lost art"? What if tatting died with ME?  I want to leave a legacy! 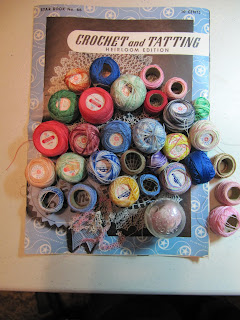