What Have I Been Busy Doing?


Although I've been tatting - what seems like continuously - I have nothing to show for it!!


Some other things have also filled my days...


A)  I made a garage for my grandson's 6th birthday coming at the end of August.  I saw this great idea on Pinterest.  The original design was found on http://diycozyhome.com/toy-car-storage/
The original used toilet paper rolls.  I discovered that many of his little cars wouldn't fit in these.  I used PVC pipe cut into 3 inch segments.  I also put plaster of paris in the bottom of the box so that it would stand upright. 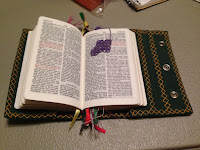 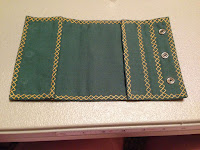 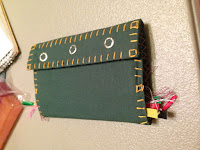 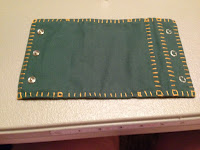 B) I have a little Bible that I carry in my purse.  For a long time, I had a heavy little plastic bag with a snap that something came packaged in that just fit the Bible...but it tore up early this year.  So I desperately needed a cover--things were getting shoved into my purse and messing up the pages of the Bible.  I planned and planned my pattern for a Bible cover out, using graph paper.  Then I cut my fabric!  It was too small!!!!  It turns out my graph paper was 5 square to the inch, and I figured my measurments at four squares to the inch!  Well, at that point it was either start all over, or work with what I had....so I made it fit!  The outside three snaps went on easey-peasey!  I went through over a dozen snaps (and at least an hour and a half of time) before I got the inside three to stay and have the power to snap and unsnap without popping off!  I hand-sewed the whole thing (I'm not sure if that is an excise for how bad it looks, or a brag--because I think it turned out pretty good!) 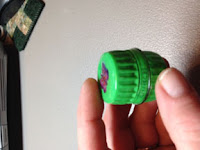 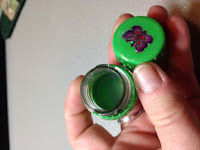 C) I saw a youtube video https://www.youtube.com/watch?v=zguw7ik6NFw which showed how to make little containers out of pop bottle caps--using duck tape.  Well that got me to thinking...I changed it slightly, making an even smaller container that was glued, not taped.  I started to make enough of these to put in the Oklahoma Lacemakers Guild's goodie bags at their Lace Embrace Day on October 3rd in Bartlesville, Oklahoma (all tatters and the public invited!).  Well, the project snowballed and  I've now made over 300 of these and given them to several tatting guilds to use in their goodie bags to hold beads, safety pins, charms etc..

So many things to craft--so little time!