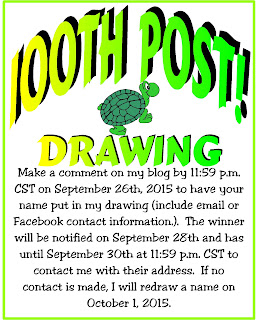 Thank you to my readers!  I started this blog so that I would have a record of my tatting, but I have made many online friends because of it.  Thank you for allowing me to share my life with you!  On a personal note--I came down with pneumonia (third time this year) last weekend.  God is so gracious that I was healthy for my trips this year!  My little drawing will include:  Some duplicate tatting books that I have, a few really old Workbaskets that were my grandmother's, a tatted item, some handmade items, a few tatting tools, maybe some non-tatting items....hopefully a nice collection of things that will brighten your day. 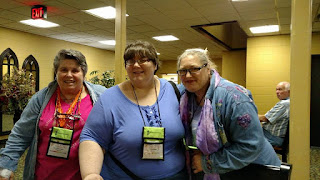 Above: Cynthia S.  Erin E. and I were roommates this year

Cynthia and I met back in 2010, when she advertised that she was going to the Finger Lakes Tatting Conference--and "Would anyone like to share expenses and ride with her, she was traveling from Oklahoma to New York?" I emailed her and found out that she lives about two and a half hours away from me.  I took her up on her offer, not knowing anything about her except that I had seen her name on the "tatting" internet for quite awhile.  (She teaches the beginners online tatting class and is a monitor for the group "newshuttlesandneedles@yahoogroups.com").    My thought was, "After all, she had to be safe because tatters were not ax murderers!"  So in April, I jumped in the car of someone I had officially met 5 minutes before and headed off to New York.  (Since then, someone has asked on one of the tatting sites, "I'm teaching tatting in a prison--does anyone have any suggestions for tools I can take into the prison with me?"--So warning!  Ax murderers might just be tatters!)

Cynthia is one of the most outgoing and generous people I know.  We are extremely alike in so many ways...and extremely different in just as many ways.  I think we really enjoy and look forward to the other's company for the small amounts we see each other scattered throughout the year.  Along with short assorted visits during the years, we have now traveled to Finger Lakes each successive year, as well as to Georgia for Tat days this year, as well as in 2011.  I am already ready for our next adventure!

Cynthia also met Erin online, and asked me about Erin rooming with us.  "The more tatters the merrier!", in my opinion!  Erin was an enthusiastic,  fairly new tatter who was attending her first conference.  I hope she had as good a time as I had this year!

After an almost brutal (long hours in the car with a very few, short breaks) car trip, Cynthia and I arrived at the Georgia Baptist Conference center.  I think we were the last to arrive on Thursday night.  We missed Thursday night dinner, for which we had reservations.  More than that, we missed the additional little Thursday night class that we had been looking forward to attending.  We received our goodie bags (NICE tote bags!!) and moved everything into our room.  Then we went downstairs for a little fellowship with the few tatters who were lingering around. 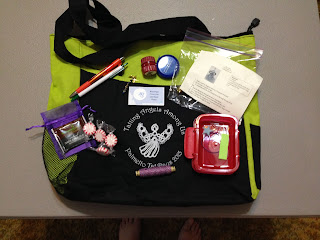 Later that night, we went through our goodie bag--1) an awesome tote bag--nice fabric, pencil pocket, big front pocket, side pocket for water bottle, and good zipper. Going around like a clock--at 12:00 is a blue tape measure, and one of my little containers made out of pop bottle caps.  At 1:30 was a "Bell Angel Kit" by Vicki Clarke.  At 4:30 was a red plastic container that held post-it notes, paper clips and rubber bands and a little star shape ("What was the star about?" I wondered.  Well the theme for next year is "Tatting is Out of This World").  6:00 is a Handy Hands thread sample. 7:30 was a little purple net bag with a tatted angel with a purple crystal in the middle.  The tiny bag held peppermints and a square of dark chocolate.  At 11:00 were two ink pens and right below the 12:00 items was a tiny little bag with a a small card which read "From the last best place--HOPE" along with the cutest little tatted angel. 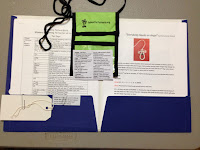 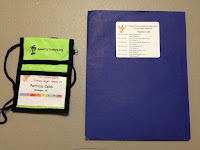 These ladies have it together!!  You ought to see the way things are organized, it is a true class act.  Along with the goodie bag, you receive a a folder and a name tag.  The name tag has your name on the front, as well as your city and state.  There are little colored blocks across the bottom of the tag that show which meals you have paid for.  On the back of the name tag is the schedule for the weekend. On the outside of the folder is YOUR class schedule (class, time and room)  Inside the pockets of the folder are all the patterns that you need for your particular classes.  Paper-clipped to the notebook were all the tickets that you needed.  (If you bought a kit for a class, there was a ticket that you took to vending, where they handed you your reserved kit.  Each person got tickets to vote on the tatting items that were brought to exhibit--there was "Best of Show", "Best Theme" and Most Creative -- these you wrote the number of the exhibited item on the back and dropped them in the voting box.  Each person also got one free ticket to put into the drawing for some of the items donated for the scholarship fund.)  We also had a tag paper-clipped to the notebook, I didn't discover until later that this was to put on our tote bag to identify it from all of the other lovely green tatting tote bags! 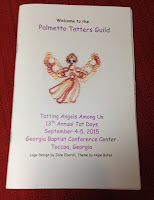 The last thing in the bag was the official "book" for Tat Days 2015.  This 48 page, 5x8 inch book is a "mini-guidebook" to Tat Days.  It includes bios of each teacher, a list of the teacher assistants for each class,
a schedule, and list of participants and their contact information.  There was a nice section that covered the rules for the Silent Auction and how to vote on the items that people had brought for the Tatting Display.  There were acknowledgments for everyone who helped make Tat Days a success (THANK YOU!!!)  Touching my heart, was a lovely tribute to three great tatters who have died in the past year and the impact they made on our craft---Bobbie Demmer, Terry McGuffin and Judi Banashek.  I never met any of them, but have benefited from the generous sharing of their knowledge and skill.  A lot of work went into this book!